Every Semester, the Marquette University and Medical College of Wisconsin Joint Department of Biomedical Engineering brings together biomedical engineers from across the United States for a series of speaking engagements describing ongoing research and novel contributions to this dynamic and engaging field.

Taking advantage of the array of known methodologies and capitalizing on the work of parallel disciplines, emerging technologies in biomedical imaging create opportunities in nanotechnology, tissue engineering, computational modeling, neural engineering, and more.  In Fall 2022, join the Marquette University and Medical College of Wisconsin Joint Department of Biomedical Engineering as we explore advancements in the field through a series of seminars highlighting ongoing research and novel contributions by some of the country’s leading biomedical imaging engineers.

Cellular metabolism, the process by which cells generate energy, is dysregulated in many diseases and pathologies including cancer, neurodegeneration, and diabetes. Current biochemical assays for metabolism are limited to either cell-destructive protocols, such as mRNA analysis, and/or measure readouts from collective cell populations, such as oxygen consumption assays.  Yet single-cell measurements of metabolism are important since cellular heterogeneity is known to drive disease progression, cancer metastasis, and resistance to therapies.  Fluorescence lifetime imaging of the metabolic coenzymes, reduced nicotinamide adenine (phosphate) dinucleotide (NAD(P)H) and oxidized flavin adenine dinucleotide (FAD), provides a label-free method to interrogate cellular metabolism. Both coenzymes, NAD(P)H and FAD, exist in either a free or protein-bound configuration, each of which has a distinct fluorescence lifetime.  Single-cell segmentation and analysis of fluorescence lifetime images allows metabolic measurements at the cellular level.  To facilitate cell-level analysis of fluorescence images, we are developing automated segmentation algorithms.  Additionally, we are creating and testing models for predicting metabolic phenotypes from fluorescence lifetime metrics.  Our applications of single-cell metabolic phenotyping include evaluating temporal responses of cancer cells to chemotherapy and characterizing macrophage phenotypes.

Dr. Justin Grobe moved to the Medical College of Wisconsin’s Department of Physiology in June 2019. He holds a secondary appointment in the Department of Biomedical Engineering, and serves as the founding director of the Comprehensive Rodent Metabolic Phenotyping Core facility. Before joining the faculty at MCW, Dr. Grobe was a tenured associate professor in the Department of Pharmacology at the University of Iowa.

Dr. Agrahara Bharatkumar is an associate professor of diagnostic radiology at the Froedtert and the Medical College of Wisconsin.

Dr. LaViolette is an Associate Professor in the Department of Radiology at the Medical College of Wisconsin. His research focuses on creating and validating imaging techniques that improve patient outcome and treatment efficacy.

Dr. Kevin Dibbern is a postdoctoral fellow within Marquette and Medical College of Wisconsin Orthopaedic & Rehabilitation Engineering Center (OREC) Labs. He has done previous work with foot and ankle weightbearing CT imaging, and is a recent doctoral graduate of the University of Iowa.

Learn more about the OREC Labs

Dr. Brian Hoffman is a Mass Spectrometry Scientist at Jackson Laboratories and former faculty of the Marquette-Medical College of Wisconsin Joint Department of Biomedical Engineering.

Dr. Daniel Sem is Vice Provost of Research and Innovation at Concordia University who has terminal degrees in intellectual property law and biochemistry. He has special interest in pharmeceutical design and biochemistry. 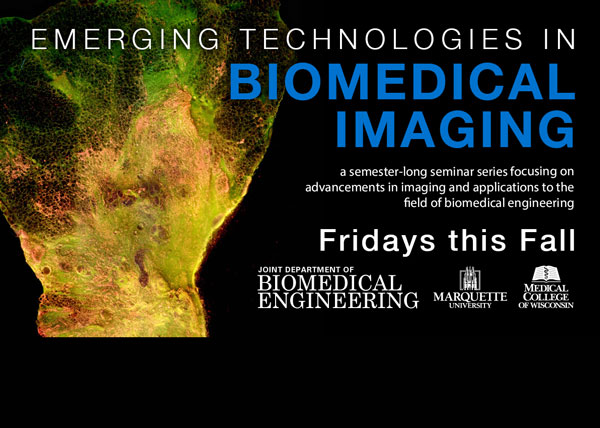 Have questions regarding the Marquette University and Medical College of Wisconsin Joint Department of Biomedical Engineering? We are here to help!